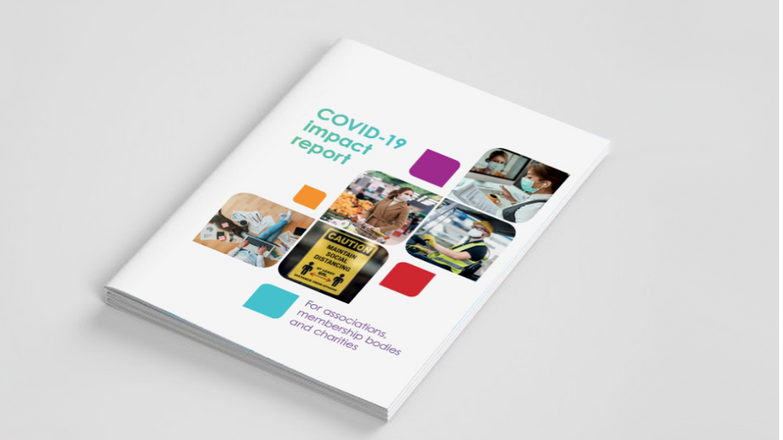 As a former director general of a trade association, I know only too well how important research is to understand the impact of market conditions. Covid-19 is having one of the most significant impacts to our society, the way we live, the way we interact with colleagues and members, and the way we run our organisations. The research I undertook in July 2020 involved online surveys sent to over 350 contacts and 30 interviews with Chief Executives or senior representatives from trade associations, professional bodies, charities and sporting institutions.  Whilst clearly everyone has been impacted in some way, what I found was a surprising resilience to adapt and some really exciting initiatives that arose.

More than half of associations were not prepared ahead of lockdown and therefore swift decisions had to be made including equipping staff with laptops, where appropriate for those that didn’t have them, and to make sure everyone could log in remotely. Those that had moved to the cloud to run their operations had a more seamless transition. The National Residential Landlords Association was actually prepared two weeks earlier, giving them an opportunity to test everything which was just as well as their normal 360 calls a day almost doubled to 600 during lockdown.

Over 45% were able to make use of the furlough scheme and 62% able to lobby government. This was one of the real positive outcomes from the process, with many organisations collaborating to lobby. The Advertising Association was seen to be one in particular as it represents a number of marketing and advertising related trade bodies. One civil servant remarked "it was like making policies on the hoof, meetings arranged in a matter of days rather than what would have taken months." Access was unprecedented but welcomed by government too as they wanted to be seen to be reaching out to offer support effectively and efficiently. Over 60% remarked that they were quite or very satisfied with government support.  Could this joined up approach be a more effective way of shaping government decision making? Peter Ward, CEO of the UK Warehousing Association commented "lobbying is a horrible word and that we should not always be looking to blame government. I want to create a position that government is the conduit to shaping policy rather than a begging bowl for money."  Peter can be heard talking about this and how he managed the association during lockdown in an indepth interview on the membershipworld podcast.

PR and Communications teams went into overdrive and new landing pages and areas of membership websites were created. As government advice was changing in some days by the hour, this was a great way for the sector to own the industry specific advice. Weekly webinars on set days were a big hit with some such as the Association of Estate Agents reporting as many as 20,000 listening live with a further 11,000 watching the recorded version.  Andy Burman, CEO of the British Dietetic Association stated that he had a 400% in web traffic.  The European Sponsorship Association had record levels of attendance on their webinars and also created a regular industry sentiment checker. 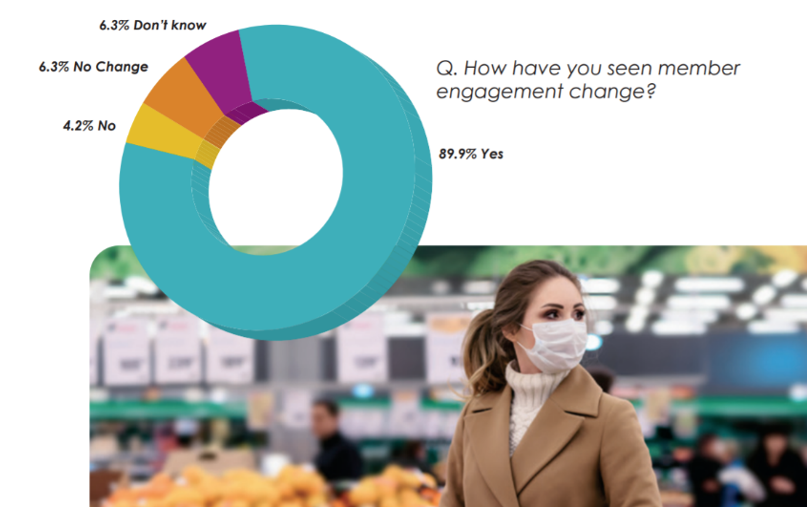 As a result 89% of respondents said member engagement had significantly increased.  A few organisations followed the government strategy style by creating clear membership messages.  For example Badminton England came up with their 3 stages of support – Protect, Prepare and Play and the Advertising Association was Survive, Thrive and Revive.

Over 65% said there was an increase in member services with information and advice the primary requirement particualrly for sector specific guidelines. Debbie Hunter, Director of Commercial Affairs at the Cosmetics, Toiletries, Perfumery and Toiletries Association provided support on counter advice for beauticians.  Education faired very well with 58% saying that there had been more requests for this service.  With a number of employees on furlough, many used this time to upskill themselves. The Institute of Sales Management reported an increase from overseas members including sales training from an Ethopian Brewery, resulting in the Institute taking on extra staff.  Chris Daly CEO of the Chartered Institute of Marketing now offers online invigilation for its highly valued courses, something that was discussed for 11 years and implemented in a matter of weeks.  New services like matching members, sourcing requests, space registers and so many more were brought into help members generate more business or connect better.

The impact of memberships did vary dependent on the association or institute. Those with a January renewal were largely unaffected, whereas those with annual renewals falling in the middle of lockdown, such as the British Promotional Merchandise Association, offered members a 3 month payment window. This was quite common. However others reported an increase in membership like the Chartered Institute of Patent Attorneys and British Dietetic Association. Our survey suggests 47% said they have had more signups. The British Independent Retail Association offered a 3 month trial to encourage those that connected with the Association during the middle of lockdown and now they have more members than they have ever had.

Whilst most are focusing on engagement and retention, respondents said they would start to look at marketing campaigns to recruit to their “warmer” prospect list.  Emma Collins from the Twins Trust, representing 19,500 members, said that many of the members couldn’t access midwife appointments and they had to set up crisis support services. "We have had to redefine the offering to reflect the ability to deliver services."  Charities have been hit badly by the pandemic and in a way this has created a perfect storm with demand for their services having sky rocketed.  For many, revenue loss for events such as the London Marathon will have been significant in terms of fundraising. The £750m Government support fell way short of what the sector required which was close to £4bn. There is a genuine fear that some charities may not survive. 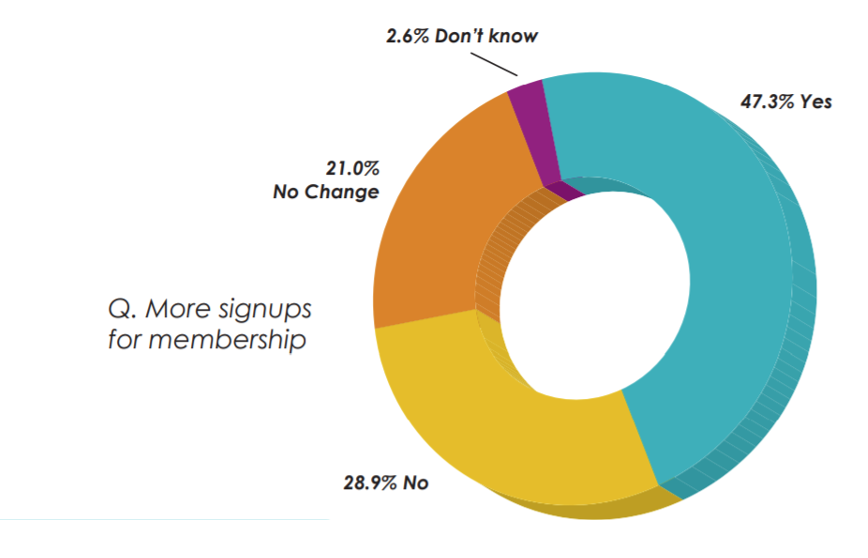 The loss of live events has been devastating for so many sectors. Dinners, exhibitions, conferences, award ceremonies, education and training normally conducted at venues have been impacted. Over 41% said that it had been a significant decrease in revenues not just from ticket sales but from sponsorship revenues too.  Online conferences have replaced many live events.  Board meetings, AGMs and regional events, however, have helped create greater engagement and attendance.  Lots of associations are trialling different online platforms and whilst some say the experience is engaging, there are lots of mixed views particualrly on how to replace networking style activity.

This is a snapshot of the 36 page report which covers more detailed research on the above points and also into the impact of employees, safety measures and what the future will look like, with summaries from many associations and membership bodies.  Receive your free printed copy here.