At the Memcom CEO’s Choice event, held in London on 11th May, strategist Belden Menkus raised questions for leaders of membership bodies to consider, and called for collaboration between organisations to confront the major challenges we all face. This event was brought to you in partnership with Trillium. 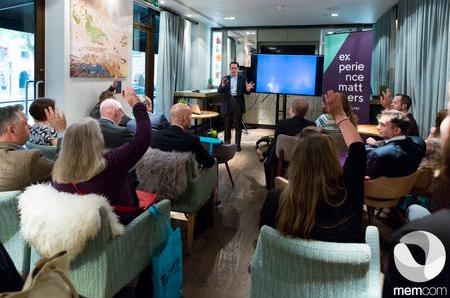 The world of work has seen countless shifts in recent decades, from the physical to the virtual, local to global, and from vertical to horizontal as organisational hierarchies become flatter. The overarching shift is from the simple to the increasingly complex.

Our speed of adaptation and response is not keeping pace with this change and the complexity of issues we face, such as climate change, racism and poverty, among others.

These major issues, or ‘wicked problems’, are all interconnected. There are no clear boundaries between them, much less consensus as to what the solution might be.

Membership organisations in general have a huge role to play in tackling problems such as these, far beyond the action their members, or any eventual legislation, may require them to take. More specifically, your organisation has the skills and capabilities to make a significant impact in one of these areas of concern, whether that is environmental, to do with equality of opportunity, or governance and regulation.

The rational, logical course of action would be not to do anything unless the board or your members are demanding it. The compelling reason you should tackle one of these issues is to be consistent with who you are as an individual and what you want your organisation to be.

Member organisations can leverage their particular strengths, that are generally only focused on members, and turn their attention outwards to the bigger picture.

The ‘superpowers’ that membership organisations have can help bring people together in a common cause. They include:

So, how do you figure out which external problem has your name on it?

No organisation can be a leader on everything – identify the one thing that really counts for you. To do this, map out the current situation. Ask yourself: what is happening out there?

Next, consider what your organisation’s unique skills and capabilities are.

Having a clear idea of these two elements leads you to your purpose.

Discern your issue, then make a choice to act.

To secure buy-in from your board or members, appeal to their values, to what really matters to them.

Remember, the biggest strategic risk to your organisation is becoming irrelevant.

The importance of wellbeing for CEOs and managers

Following a heart attack, two operations and six-month recovery period, Geoff Webb urges other CEOs and those in management to take their wellbeing seriously.

We are pleased to announce the first of our key speakers for the Memcom Conference 2022.

The Memcom excellence awards are for any membership organisation, professional or trade associations, or not-for-profit company that want to gain recognition for their hard work and innovation.

Now, here, you see, it takes all the running you can do, to keep in the same place. If you want to get somewhere else, you must run at least twice as fast as that! – Queen of Hearts, Alice in Wonderland

Best Podcast of the Year

We go behind the scenes to meet the talented winners of the Memcom Best Podcast of the Year Award, Lee Davies and Gwilym Roberts from the Chartered Institute of Patent Attorneys.