With the aim of empowering leaders to champion diversity in their own organisations, the Chartered Management Institute (CMI) designed and conducted research into equality in the workplace. The findings not only provided the evidence base on which leaders and managers could drive progress, but also gave rise to practical guidance. The campaign, entitled Moving the Dial on Race, received the Memcom award for Best Equality, Diversity or Inclusion Campaign in 2021.

The CMI is dedicated to developing brilliant leaders and giving them the management skills they need to unlock the potential of others. The Institute believes that making equality, diversity and inclusion core to its values and purpose is essential if there is any chance of achieving that goal.

In 2017, CMI Race was established, and the Institute published a report entitled Delivering Diversity, setting out the reasons EDI was a critical consideration for businesses to be successful. The publication highlighted the lack of representation in many workplaces, particularly in management roles, and set out a framework for leaders to take action and champion diversity at all levels of the organisation.

However, in 2020, further CMI research found that senior leaders still needed to do more to build inclusive cultures and support racial diversity in their organisations, with the private sector and SMEs identified as having most room for improvement.

In that context, CMI developed Moving the Dial on Race, a dynamic campaign which aims to build a culture of support, healthy conversations and zero tolerance for racism.

The foundation of the campaign was research designed and conducted in collaboration with Dr Jummy Okoya, an accomplished leader and academic in the field of EDI and organisational wellness. The survey captured the opinions and experiences of 838 managers around the world. The findings were augmented with case studies relating the lived experiences of managers and leaders from diverse ethnic backgrounds. 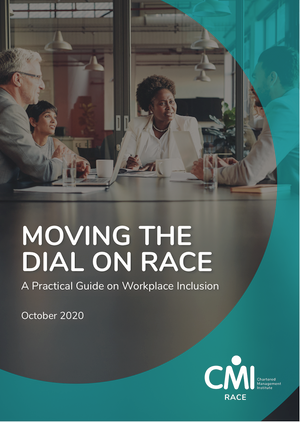 Once the structure and findings of the research had been scrutinised by the CMI Race Advisory Committee, the campaign was launched with the publication of a Practical guide to workplace inclusion. The guide details steps CMI’s communities can take to support antiracism in their organisations, and inspire and empower their teams and peers to do the same.

The guidance focused on how to:
1. support people who face racism
2. learn how to talk about race
3. end microaggressions at work
4. build support
5. raise awareness and skills

The campaign initially targeted the CMI community of 140,000 managers and leaders from the public, private and third sectors around the world, and was championed by the Institute’s CEO Ann Francke.

In addition to the ongoing research, Moving the Dial on Race encompasses a regular series of events and guidance for the community, as well as EDI qualifications.

Reinforcing the message
One of the lessons CMI drew from the 2017 Delivering Diversity initiative was that ongoing reinforcement of the message was key to the success of a campaign, so ‘Moving the Dial on Race’ was followed up with:
● a livestreamed panel discussion with the advisory committee
● a unified social media campaign, featuring the project stakeholders, sponsors and committee members
● a monthly webinar series on the topics in the report, bringing in the expertise and lived experiences of academics, employers and leaders.

In December 2020, CMI published a Progress Report, to provide the community with further evidence on which to make changes in their organisations.

Outcomes of the campaign

Within four months of publication, the practical guide had been downloaded almost 6,000 times. Similarly, the initial webinar had received 1,600 views, and a further 600 participants had booked places on the following session. CMI also received testimonials from organisations detailing how the guide had had a positive impact in their workplace.

‘Moving the Dial’ has also had wider implications, with CMI Committee members being invited to talk about the campaign at events at universities and other networks, and leading to new EDI projects with other chartered bodies.

“CMI is committed to measuring progress on race at work and will conduct further research. We’re hoping that the dial has moved significantly, but we know that there’s more ongoing action required. By making ‘Moving the Dial’ an ongoing campaign, we are hoping that the values and the practical steps become embedded in the behaviours and attitudes of society.”