This article is based on edited remarks from a Memcom Conference 2022 session, led by David D’Souza, Membership Director, CIPD, in conversation with Denise Sanderson, HR and Learning Consultant, Damson HR.

David D'Souza: The Coronavirus pandemic forced many organisations to switch to remote working without the luxury of being able to develop a coherent policy first. Two years on, most organisations recognise that things have changed for the long term, but developing a more permanent hybrid policy that works for employees, the organisation and its stakeholders is proving a challenge. There are no simple answers, and in these increasingly uncertain times, it’s hard to predict what will work. Learning as we go requires humility.

We need to break from the somewhat lazy default that we should all be working together in one place the whole time. Certain types of work are very relationship-driven. There’s a bank of evidence that suggests that, even in knowledge work, teams that trust each other are more likely to share work effectively at the right times, in the right context, and achieve better productivity. So of course there is value to people being together, but it doesn’t necessarily have to be every day.

Any policy you do arrive at has to suit the context you’re operating in, the tasks employees are carrying out, the intention people have about using space, how your teams connect, among a whole range of other factors. 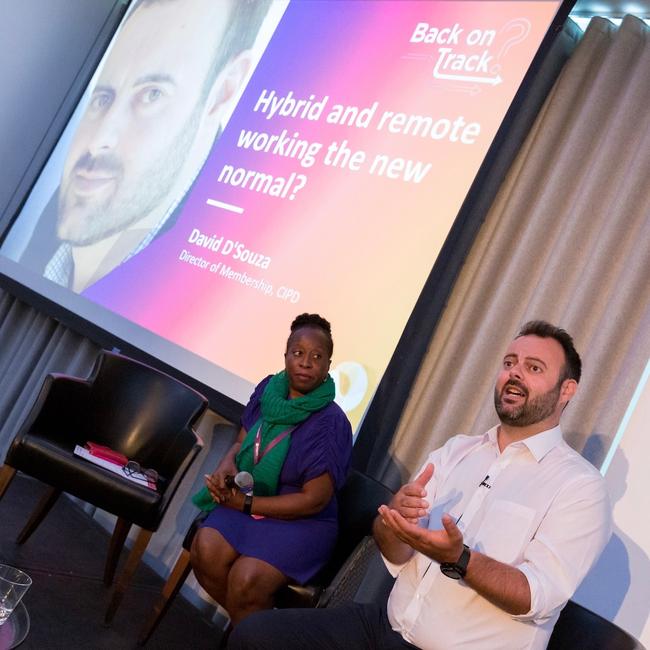 Dialogue and engagement
Denise Sanderson: One of the things that is quite clear from the questions I receive, is that in many workplaces, HR and leadership are huddled in a room trying to work these things out, without consulting the people who will be most affected by the policies they come up with, causing frustration among employees who feel things are just being imposed on them.

Have an open and transparent conversation with the people who will be affected, because then you will at least understand their arguments a lot more clearly. It doesn’t mean the answers will be any more robust because we are working with uncertainty at the moment, none of us know how to get this right. Be honest and acknowledge that: ‘We are grappling with this issue, and we are not alone. We’d like to hear what you think the challenges are.’ Of course, you need to have that boundaried, for instance: ‘At the end of the day, we [the board, leadership etc] will make the decision, and whatever happens, we need to stay within X amount of money/ budget.’ Explain your reasons and engage people.

Think about intersectionality when you’re asking about people’s views and needs. Be mindful not to just group all women together, for example.

Fairness and equality
David: According to a CIPD survey, 25% of employees are concerned about being less favourably treated because they are working from home, or otherwise away from the office. That perception poses a significant challenge for organisations, because if an individual doesn’t get an expected pay rise or promotion, they will put that decision down to the way that they’re working, and that will have an effect on the wider culture. Employees are at their most productive when they feel they are being treated fairly.

Historically, there has been a greater penalty to women and their career progression for working from home (in terms of pay, promotion, bonus, and performance ratings), and we need to make sure we’re not taking these negative aspects with us into the next phase.

Research suggests that the allocation of projects and programmes in organisations is imbalanced. That gets magnified in the promotion process because men tend to get handed these assignments more often, so when it comes to an opportunity for promotion, the decision maker can say ‘he’s worked on all these interesting things…’

Lack of progression for women within the organisation may lead valuable employees to look elsewhere. It also means your organisation is missing the opportunity to create valuable role models.

Think about what you can do to assess performance fairly, regardless of the employee’s location. Focus on outcomes of work rather than presence.

If you start thinking about how you want to use projects and programme assignments to promote talent and give people a chance to provide value, and you make sure that they are allocated in an equal way, then you‘ll have the right range of people working on interesting things. That will help them build their CVs and get into the right position to prove their worth.

Another established problem which could be exacerbated by hybrid working is the tendency to promote the loudest people, rather than the most talented.

Denise: We need to be much more intentional in how we connect with people in meetings, to make sure all voices are heard. Be aware of what’s going on, and constantly check in on those people you aren’t hearing from.

Dealing with pushback from staff on required office attendance
Some organisations who have set a minimum number of days per month employees are required to be in the office are fielding complaints from staff who moved out of London during the pandemic.

David: You want to get to a situation that works for the employee and the organisation. If the policy is working for 98% of people, try to resist changing it for everyone in respect of two individuals. Designing for the majority and then dealing with the minority by exceptions is the way to do it.

If those concerned are challenging the value of coming in, as an organisation you are allowed to say: ‘There is inherent value in being here, it’s important to us to keep that connection…’

You have to decide whether it is acceptable for people to break that model. [When they made that decision to move away] the individuals knew where you were based and that they would probably be required to come back into the office at some point.

Denise: We are expecting to see more cases coming to tribunal on this issue, as well as in instances where salaries have been reduced to reflect the lack of a commute [associated with remote working].

Be as reasonable and flexible as you can, because you don’t want to be involved in a test case. But we have a legitimate ask of people to be reasonable also. Tribunals will look at what processes you followed, what conversations you had, what efforts you made, did you understand why the person was behaving as they were? And ultimately, were you being reasonable or unreasonable? And that goes both ways.

Think about how you’re structuring the activity that makes it of value for people to make the journey in. Can you schedule a one-to-one or a team meeting around it, so people don’t feel they’ve got to come in and sit in a big meeting room, whereas six months ago, they could have listened in online from home.

If you’ve done everything you can, it might be a case of ‘Perhaps we both need to consider this relationship because we need to deliver X, Y and Z, and this is why we’ve asked you to come in.’

Denise: Investing time and energy in building relationships with your team members is one way to make things feel more manageable when an issue does need to be addressed.

If the person is new to your team, ask yourself whether their challenges are amplified by hybrid working – for instance they may not have had the training they need, or the opportunity to sit next to someone in the office who could talk them through things.

The usual rules apply, regardless of setting: Be very clear about why you are having the conversation. Make it a dialogue and give them time to respond. Revisit and record it.

David: Put dignity at the heart of the interaction. If you would like to know if you were underperforming because that would at least give you the opportunity to put things right, you can’t shy away from those conversations with other people, we owe it to them.

When you have a difficult message to deliver, think about the timing of the conversation.  Are you going to start the person’s day off with that message, or end their day on that note?  If the team member is alone at home, have they got anyone they can talk to afterwards? Without disclosing the issue or singling anybody out, can you get the team’s welfare rep or go-to confidant to check in on them?

Eight sure fire ways to win the battle for member attention

The Ukraine War: How to plan for the unthinkable

Conference Roundup: This article is based on a discussion at the Memcom Conference 2022, held in London on 29 June, which provided a forum for the leaders of membership bodies, trade associations and not for profit organisations to discuss the challenges arising from Russia’s invasion of Ukraine.

In the midst of change and uncertainty, be kind to yourself

In times of uncertainty and upheaval, be kind to yourself. Reflections on how to cope with rapidly changing circumstances, from Memcom’s CEO Central network.

At the Memcom CEO’s Choice event, held in London on 11th May, strategist Belden Menkus raised questions for leaders of membership bodies to consider, and called for collaboration between organisations to confront the major challenges we all face.