As the impact of COVID-19 began to be felt in the UK, and many questions about the progression and treatment of the disease remained unanswered, Dr Sandy Mather and her team at the Intensive Care Society (ICS) identified a crucial role they could play, in line with their charitable object: “To advance and promote the care and safety of critically ill patients.”

“In early March 2020, I was talking to two of our Council members, our President at the time Dr Ganesh Suntharalingam, and Professor Hugh Montgomery, about how we could share information about COVID-19 on a website,” explains Sandy.

“At the time, there was an absolute lack of knowledge about how to treat this terrible disease. Hugh is an intensive care consultant, as well as an academic, and has a wealth of contacts. He had the idea: ‘Why don’t we just get everyone together to start talking about what we need to do?’ The National Emergency Critical Care Committee (NECCC) was the result of that conversation.”

Bringing disciplines together
“We (the ICS) hosted it, and we did so on a very inclusive basis. Anyone who felt that they could contribute something was welcomed in.”

“We particularly targeted our representatives in NHS England and NHS Improvement because they were the ones advising the Chief Medical Officer for England. We informed our link at the Department of Health and Social Care that we were setting up the NECCC so that they weren’t wrong-footed."

“On 18th March 2020, we set up the first National Emergency Critical Care Committee meeting, which had about 53 people. We only thought we would get about 20 people at our first meeting as we were just exploring whether it would be a useful way to share knowledge, and questions like ‘what workstreams do we need?’ Looking up at the screen of 50+ people from all over the UK, it really sunk in just how big this was becoming.”

“We agreed to meet weekly and expanded the group, bringing together between 80-130 people from the private sector, the public sector, research, government and policy makers, as well as frontline clinicians. These professionals come from across the intensive care community, including physiotherapists, nurses, trainee doctors, consulting doctors. People wanted to be involved, they were really thirsty for knowledge.”

“Seeing what was happening in Italy, we expected large volumes of patients to require Intensive Care and we became concerned about the rehabilitation care that would be needed, so we invited professionals who would be involved in delivering that, too.”

“One of the key workstreams was communication – how could we get the message out to the public as well as other professionals? We involved Dr Xand Van Tulleken because he’s medical, in the media, and understands how to communicate, and he led a workstream on ‘myth busting’. On the Society’s staff side, our Head of Communications, Alex Day, and Head of Standards and Policy, Asha Abdillahi, were also involved as they would play an important role in getting the message out.”

Another workstream centred on sharing knowledge nationally and internationally. The Intensive Care Society organised the virtual meetings, and Hugh Montgomery chaired subsequent knowledge-sharing sessions and suggested potential speakers - clinicians with first-hand experience of COVID treatment. Some of them were able to share learning from colleagues in other countries.

“It was a huge challenge to set it all up, and I would never have believed we could do it so quickly and run weekly virtual meetings from then on. In the early days of the pandemic, nobody had heard of Zoom, so finding the right technology to host it on was one of the biggest challenges of all.” The achievement is all the more impressive as, at the time, the Society had just eight members of staff.

So that the learning could be disseminated to clinicians across the UK as quickly as possible, a summary was produced within two-three days of each session. These ‘guidance notes’ were produced by UCL Partners, an academic network whose expertise lies in research and pulling together information very quickly. The notes were sent out through all of the Society’s communication channels, including LinkedIn, Facebook and Twitter, as well as via email to the Society’s database of 6,000 contacts. 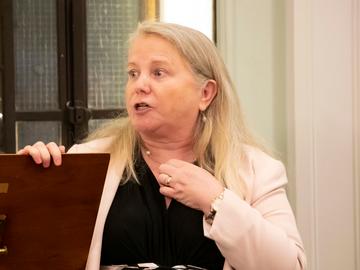 Unanswered questions
The following month, the knowledge sharing event was repeated and expanded to include colleagues from China, France, Germany, Italy, Spain and the USA.

“In April, when we were still reaching the peak of the first wave, we ran our first international knowledge-sharing webinar with about 1,000 participants from across the world.”

“At that stage, there were many unanswered questions about COVID. Why wasn’t it responding in the normal way when patients were in intensive care? Why were patients developing blood clots? Why weren’t they responding to ventilation? Why were there so many patients suffering with renal failure?”

“To begin with, the knowledge shares were quite broad and focused on the recurrent symptoms that intensive care patients were struggling with, and that clinicians were struggling to help them with, and where we needed to find out more.”

The sessions often raised more questions than answers. To explore them in more depth, topic-specific sessions were held on subjects such as ventilation, renal failure and infection, with participants from the relevant fields. For example, colleagues from the haematology-related societies and radiologists, who would diagnose clots with CT scans, were invited to the session on thromboprophylaxis.

Outcomes
“There was a lot of research into treatments going on at the time, and one thing that was critical in our NECCC was that we had an update from the National Institute for Health Research at every meeting on how the clinical trials were progressing. We knew research was a way out of the crisis, and at every meeting our Directors of Research encouraged people to recruit more patients to the various trials. One of the studies we recruited patients for was into the use of Tocilizumab, which later became a recommended treatment option.”

Another example of the initiative’s many successes is from the NECCC’s very first knowledge-sharing event. A participant shared their observation that a number of COVID patients were experiencing clots in their lungs. Another clinician acted on the information as soon as he returned to his unit. He arranged a CT scan for a patient, which did indeed detect clots in the lungs. The information gleaned at the knowledge share changed the patient’s treatment significantly, and ultimately saved his life.

The NECCC met weekly between March 2020 and September 2021, at which point the meetings were paused as the levels of infections and hospitalisations were fairly static. With the arrival of the Omicron variant and rising infection rates in early December 2021, the committee was reconvened and continued to meet fortnightly until February 2022. “We will reconvene NECCC at short notice if our intensive care community see a need," concludes Sandy.

To find out more about how the Society provided psychological support to clinicians working in Intensive Care units during the pandemic, click here.
Return to listing